I’m a big fan of the old Toronto comedy troupe “The Kids in The Hall”, and one of their many cool skits involved “Premise Beach”. This was a beach on which a bunch of surfer-lookin’ guys would shout out strange sketch premises, and a corresponding skit would follow (e.g. What if there people whose heads were shaped like beautifully wrapped presents??).

Well, I could totally have pictured this TV-Movie from France stemming from one of these “Premise Beach” ideas. What if two friends decide that a good way to make money would be to kidnap Obama’s Grandma (or OBAMAMA as they call her) and collect a ransom? 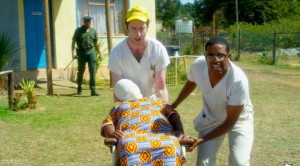 Well, here you go. Director Olivier Abbou delivers the answer with “Yes We Can!” and you’ve gotta admit, that’s a funny premise. That being said, I’m sad to say that despite my high hopes, the premise is pretty much the best part. Best described as a French “Dumb & Dumber”, the flick just takes too long to get where it’s going, with the promised moments of hilarity too few and far between.

Don’t get me wrong, this movie is far from un-watchable. It’s cute and unique in it’s own way, and there are some great scenes and dialogue. Ultimately however, the film falls short of being an amazing PARTY-MOVIE. Definitely give it a watch if you’re curious, or in the mood for something politically edgy-funny. It could be as good as a foreign TV-movie gets, given that you’ll likely NEVER see this movie on the air here in North America (for several reasons), but it’s not something I would mobilize the gang to come see next PARTY-MOVIE NIGHT.