Growing up, I did not know a single person who owned a LaserDisc player, nor did I even know of it’s existence. It came around the age of the VHS and the Betamax, but it never gained wide popularity due to it’s high cost and low movie selection, although it did deliver a better picture than VHS. I saw one once when I was in my mid teens; it was a copy of True Lies, and by this time the DVD was released and I never payed that much attention to it.

This all changed recently when I discovered a LaserDisc sample disc that would show all the great new features that the LaserDisc would bring to my home. It was 1$ so I said why not and picked it up… quickly realizing that simply owning the disc was not enough I began the search for a player. Looking through Craigslist showed that there is a very niche market for these players and the players were not going for dirt cheap; the cheapest began at 100$. After pursuing a few leads that never went anywhere, Jonny put up an ad asking for a player for cheap and we were lucky enough that a former a/v tech saw it and cut us a deal.

The Disc That Started it All

About a dozen movies later and I have reached a decent collection with such notable titles as Blade Runner, 2001: A Space Odyssey and Police Squad. 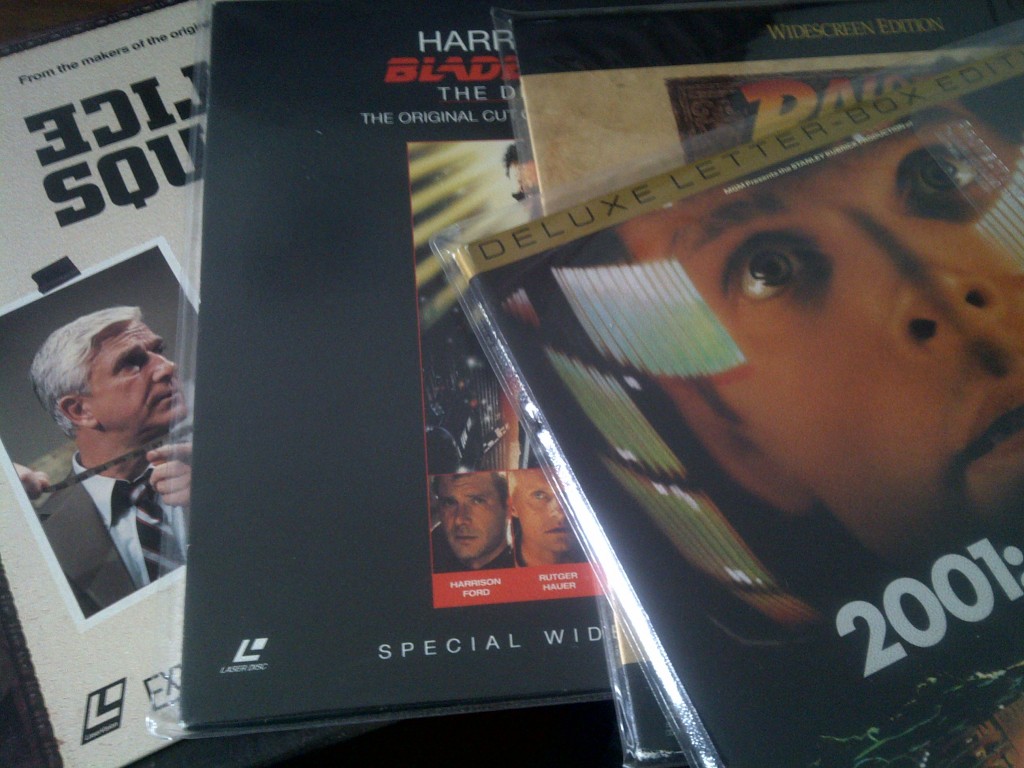 I finally had time today to properly sit down and enjoy the LaserDisc, so I popped in Raiders of the Lost Ark since I have seen this movie to the point where i can’t count anymore, it would be perfect for me to see the differences between the LaserDisc and everything else. I noticed a that I was able to understand quiet dialog that I never had before and there were many small scenes that were added into the movie. In all it was a great experience as it still has the grainy VHS look, but is a higher quality than VHS as it is close to double it’s resolution.  One big drawback though is that half way though the movie the disc will need to be flipped so the other side can be read, much like a vinyl record. Fortunately, I got a player that does it automatically.

As the movies are still very expensive compared to VHS and DVD, I don’t think I’ll be amassing a giant collection but it will serve as a great novelty and as a new way to make movie nights memorable because so few people have seen a LaserDisc movie. All in all, if you are browsing a garage sale and stumble upon a LaserDisc player and some movies, make the people an offer. You won’t soon regret it. There is a slight trend towards this medium recently, as several films and special editions/director’s cuts are, to this day, only available on LaserDisc.

Do you have a LaserDisc player now or back in the day when they first started? Let us know in the comments. Some dude wanted 400 for his… the reasoning being that he paid 1200$ in the 90s for it. Sentiments are priceless it seems!